Prometheus is taking the monitoring world by storm, in cloud-native and traditional environments. This talk will cover new developments in the Prometheus world and give an outlook on the roadmap of the project.

Amongst others we will look at details of the new storage engine's hyperscalability, Prometheus' generic read/write interface, third-party integrations like InfluxDB and Weave Cortex, as well as efforts to spin out Prometheus' exposition format into its own project.

Skills
Attendees should ideally be familiar with Prometheus and its underlying concepts to gain full advantage of the talk. That being said, anyone with a working understanding of monitoring will benefit from this talk.

Lernziele
Updates and news about the Prometheus world, including: 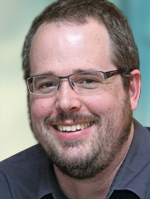 is a technical architect at SpaceNet with a heavy focus on networking, monitoring, and effecting change throughout all levels of a company. By night, "RichiH" is involved in several FLOSS projects, including Debian and Prometheus, and organizing related conferences, including FOSDEM, DENOG, and Chaos Communication Congress.